I found this dish through Maangchi, a Korean food YouTuber, and knew I had to try and make it. This recipe is my take on her’s, however I added a little vinegar for acidity and rice syrup for a sticky sweet finish that makes this tofu so addicting.

Perfect served on its own for a quick snack, or with steamed vegetables and rice as a light meal, this recipe is (somewhat) healthy and very satisfying. I usually make it as a meatless meal during the week.

The key is to fry the tofu until it creates a skin that is dry and crispy. Try to not flip it until it is ready – all you need to do is set it down and let it go. If you have a little time you can further dry the tofu out in advance by taking the block out of its packaging, wrapping it in a paper towel, and pressing it down with a weight (I like putting cans on top of a plate) for 20 minutes.

Step 1: Drain and pat the tofu dry with a paper towel. Cut into 1 cm thick blocks.

Step 2: Heat frying pan on medium high. Add frying oil. When oil is hot (you can test by sprinkling water on the pan – it’s ready when the water sizzles immediately upon contact) add tofu in single layer and shake pan to distribute the cooking oil under the tofu.

Step 3: Cook the tofu for about 10 minutes. Try not to flip them until they start to develop a crispy skin. Check the tofu on the sides and middle of the pan and make sure all pieces are cooking evenly. Reduce heat if needed if tofu is starting to burn.

When all pieces are evenly toasted and golden brown on one side, flip them and cook the other side.

Step 4: While the tofu is cooking, make the sauce. Start with the gochujang and gradually thin it out with the sake. Add the soy sauce, sesame oil, rice syrup, and vinegar.

Step 5: When both sides of the tofu are crispy and golden brown, add the sauce. Reduce the sauce for a couple minutes while coating it on the tofu. When the sauce is thick and syrupy, everything is ready. 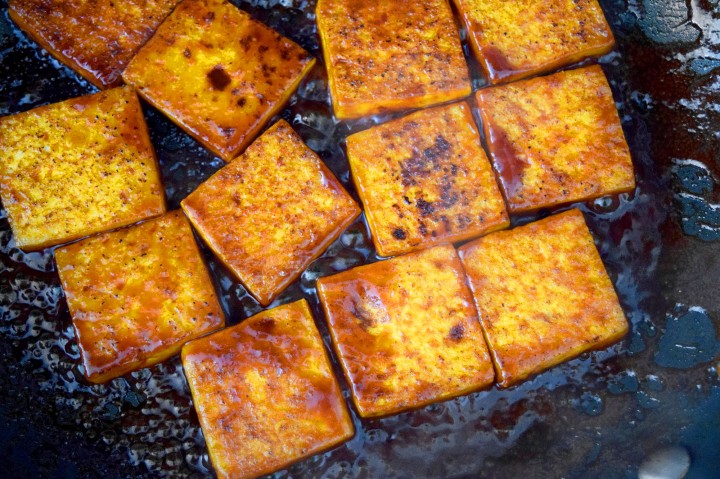 Since I’ve started interning at the American Heart Association, health has become a forefront in my cooking. I realize that this may sound a bit ironic coming from a girl whose blog revolves around her eating and cooking. However when I read on a daily basis about the things that are making us unhealthy, I just can’t ignore them.

With that being said, I looked for something that would emulate the texture of something deep fried. I wanted something with a  serious crunch to prove that something that feels unhealthy doesn’t have to be. Then I remembered a tip I learned last semester when I interned at a culinary school. I was taste testing one of the student’s meals, an exploration of how many ways someone can cook salmon. Off to the side was sesame crusted salmon. This nutty exterior lends the tender fish just the right amount of crunch. Only without using too many carbohydrates, which was exactly what I wanted. This crust also doesn’t require a lot of oil to pan fry the exterior. The seeds actually crisp up on their own, we just help them out a bit with a little oil.

I also had some wonton skins leftover from when I made basil cilantro dumplings. So this is where this recipe came from. A combination of east meets west, in a way.

*Just a note, this is not an AHA recipe. I am also not a nutritionist. However this recipe was made with the intention of being on the healthier side. I, however, did not want to sacrifice the flavors of certain ingredients. So you will see some things that may not seem healthy- like the knob of butter used to sauté the chives. Feel free to sub any of these ingredients for a version that suits your diet if need be. 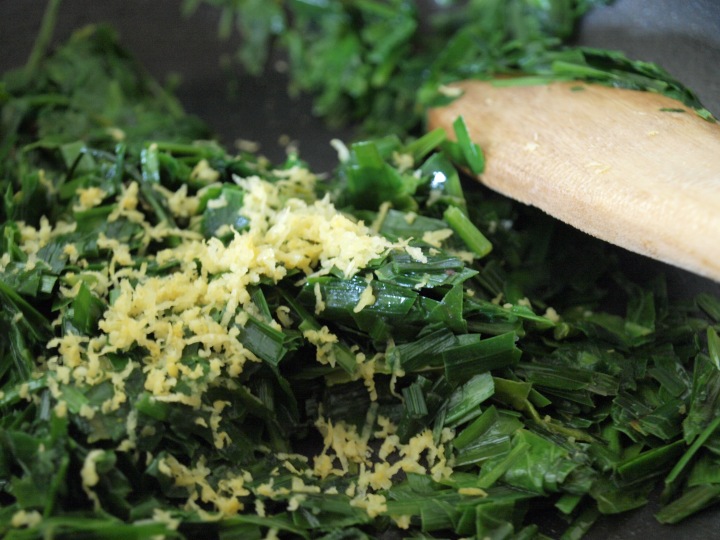 Sauté the chives and greens in the knob of butter until soft. Season with salt and pepper. Add the lemon zest.

Take a wonton wrapper and with your finger, moisten two sides of the dough with a drop or two of water. Drop a tablespoon of the chive mixture. 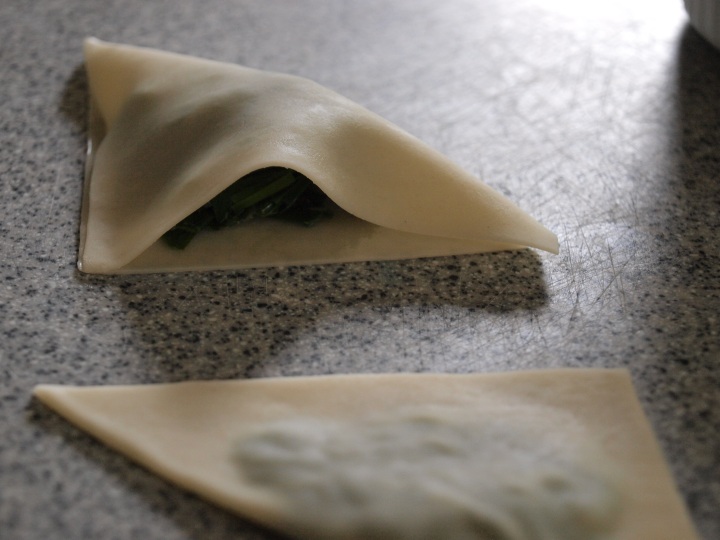 Fold one corner over the other to create a triangle. Slowly seal the edges, all while pushing out as much air as you can. Any air left in the wonton will make it puff when cooking, making it hard to tell if it is fully cooked. You want these to be as flat as possible.

Lay them in a single layer on a plate. This is a relatively large batch, and you can organize the dumplings by keeping a damp paper towel between the layers to keep them separated. When you are finished you must cover them with a damp paper towel or the wontons will dry out.

Take the cubed salmon and pat them down with a paper towel. You want them to be as dry as possible.

Now measure out your breading ingredients. The flour will create a dry surface on the salmon, which will enable the egg wash to stick, and the sesame will form your crust. 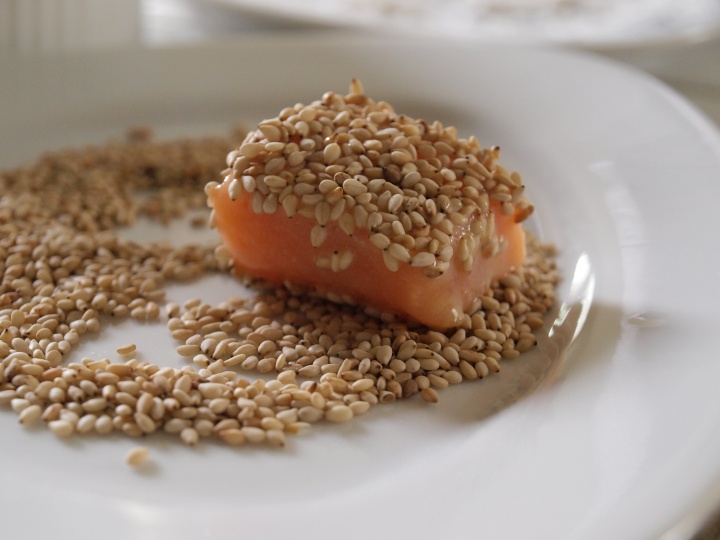 Take your salmon and pat two opposite sides in the flour. Then repeat the process in the egg. Finally, drop the salmon into the sesame seeds. Repeat the process for all of the salmon. Of course, I did the small pieces for the pretty visual effect. If you are in a rush, you can do the entire filet in one step. Doing this will only increase your cooking time by a couple minutes on each side.

Now lightly oil your frying pan and heat it to medium. Place one side of the salmon down and cover with a lid. Let it cook slowly, allowing the fish to cook while preventing the crust from burning. After cooking about three minutes, flip the fish over and cover again, cooking for three minutes. Repeat this step for all of the fish. If your crust risks overcooking before the fish is ready, pull it from the stove and place it on a baking rack. Continue to cook it in the oven at 350 °F. The fish is done when it no longer looks translucent. No matter which way you finish cooking, let your salmon cool on the baking rack – this prevents steam from making the surface soggy.

Finally heat your chicken broth. I added a couple leaves of fresh basil to scent my soup. Add in your wontons to reheat them. Prepare your vegetable garnishes.

To serve, scoop some dumplings with broth into a bowl. Add your veggies and top with salmon.