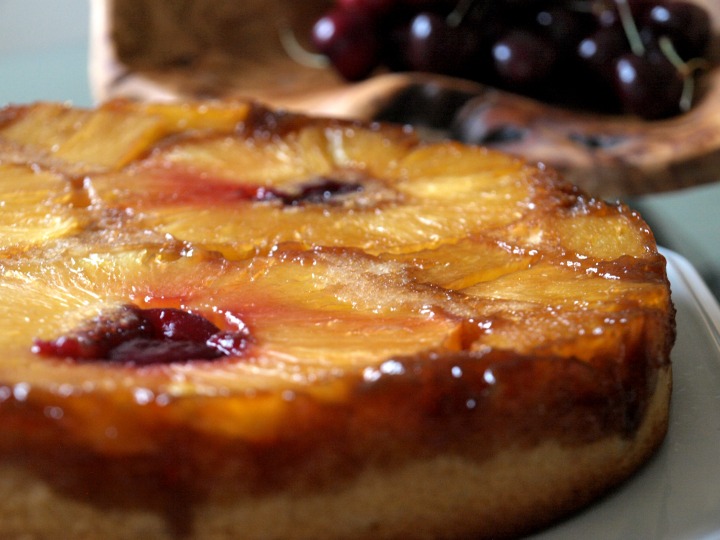 So this will be a shorter post this time, one without the actual feature of a recipe. In fact, this isn’t one of my recipes. For those that want the original, you can find it here.

However I wanted to use a classic recipe to help bring focus to a specific ingredient: brown butter.

That was the only change I made to the recipe, with the exception of fresh cherries instead of Maraschino. Rather than go the traditional route, I wanted to play with the tangy flavor of fresh fruit contrasted with a really earthy element. Which was why I went for brown butter- it makes everything taste warm and homey.

Instead of using normal butter, I went for brown butter. So if you want to completely recreate the picture above, anytime the recipe calls for butter, use brown butter instead. Especially in the brown sugar sauce on the bottom.

Brown butter, or beurre noisette in French, is a common ingredient in French pastries. it is made by melting butter and slowly toasting its milk solids until the liquid turns brown. The end product will result in a nutty, luscious butter that you can use as a liquid or solid.

I am not exaggerating when I say that your kitchen will smell the best it ever will. It’s hard to even explain how this stuff smells. I know that at the beginning of the post, I listed “warm” and “homey,” but what scents make up those adjectives? If you were to combine the smells of toasted bread, roasted nuts and pure unadulterated butter, that’s what it would be. It’s almost umami. There’s a subtle savory note that makes desserts so complex that you will want to eat the cake batter raw. I was only mixing the butter into the flour, and it already smelled like I could eat it straight.

Either way, like how this BuzzFeed post says, it will take any simple recipe and make you feel like a gourmet chef. And you didn’t have to do anything fancy. Making this stuff is almost like boiling water. Only with fat.

And just because I’ve fallen in love with this ingredient, I’ve thought of a couple different uses for it. Click a choice below if you want to see these desserts come back to The Glutton Diaries in the form of a recipe post!